Hello there my lovelies ❤

I’ve been updating my blog and shifting widgets around for days.  I am still fussing with the menu, but you will now find a “categories” section on the right hand side.  It’s incomplete, but it will allow you to quickly search for posts under specific topics.

I’m rearranging my bookshelves so that I can make room for all of the books I received as Christmas gifts! .. Books are located by importance .. Top shelf to the bottom.  I have a five-year-old.  Enough said.

I am going to list twenty (believe it or not, this was originally a “ten” post .. not a “twenty”) authors that you can readily find on my bookshelves, and then I will name my favorite book ( and if I can’t take it .. a runner-up) by that author.  This post is going to be difficult 🙂  It’s like asking someone what his or her favorite movie is heh

You can find reviews for most of these books under the REVIEWS category (or menu button).  If you’re interested in one of the books that does not have a review, please feel free to email me with questions.  You can also visit goodreads.com.  They have a wide range of eclectic reviewers!

REVIEW: Hidden Away – A KGI series novel #3 by Maya Banks

To say that I am extremely disappointed in this book would be an overstatement.  The other books in this series have not had better impressions so I suppose I was expecting to be bummed.

I do not much care for this series.  I do not like the books so far.  The only thing the KGI series has going for it is the characters…And the characters rock!

Hidden away is the KGI series story about Garrett and Sarah.

Garrett is sent on a mission that brings his agonizing nightmare of a past to life.  He is forced to protect a woman…the half sister of the traitorous man who changed Garrett’s life.  Sent on the “bullshit” mission, he’s forced to lounge on a beach, fish and drink beer all day.

Doesn’t sound too bad, right?  Well then you throw in the babbling and terrified woman he is to protect and I suppose things get a little interesting.

If she’d witnessed a murder, it wasn’t all that had happened.  Someone had hurt her or scared the hell out of her, and it enraged him.  Yeah, she was a job and he took each and every job seriously.  But the surge of protectiveness he felt whenever he looked at this scared, fragile woman went beyond that of a job.  And he was at a loss to explain it.

Sarah witnessed her brother murder a man she shared a past with.  Although she felt no remorse from the man’s death, she fears what will happen to her brother if the authorities realizes his involvement.  She’s on the run and of course bumps into Garrett on their little island of not so paradise.

She laughed.  She couldn’t help it.  Her shoulders shook and she looked down and laughed all over again.

“What the hell is so funny?” he demanded.  “Definitely not good for a man’s ego when a woman looks at his dick and laughs.”

I had to read 60% of this book for something interesting to happen.  60%.  Things became exciting for a few pages.  Enough said.  Total bummer.

I am only recommending this book to mature adults who are stuck reading this series because of the characters 😦  I adore Maya Banks but this series is just not for me.  Moderate violence and sexual content.
~Happy reading!

REVIEW: No Place to Run – A KGI series novel #2 by Maya Banks 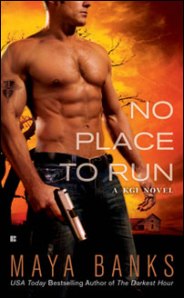 After a quick fling with a local waitress in Mexico during a classified mission, Sam must walk away from the woman he shares an explosive passion with.

After completing his mission, he returns for her.  Aching for the woman who hasn’t left his thoughts since he left her sitting in his bed.  She was nowhere to be found.  Disappeared.

Five months later, Sam was unfocused.  He rejected all incoming mission requests and his brothers were concerned and going stir crazy over their somewhat forced vacation.

While his brothers are lecturing him to forget the woman who is screwing with their lives, Sam spots a log in the lake.  Voila, he pulls Sophie from the cold water.  It was then he noticed that she was pregnant.

Running from her family, the very family the Kelly brothers sought out to terminate, after five months she was struggling to defend herself.  Tired of running from the assassin her Uncle sent, she accepts that she must ask for help from her baby’s father.  Sam.

This book is centered on the pregnant woman Sam had an affair with five months ago.  She’s holding back information and keeping her secrets to herself.  His brothers are suspicious and so was Sam.

So far, I am enjoying this book more than The Darkest Hour.  This book does not hold as much military content, but the plot is still there.  Trying to protect his family and loved ones, Sam pulls in his teams and his brothers to protect what is his.

I recommend this books to mature adults only.  You do not need to read the first book in this series to understand or appreciate this story.  Although, you will appreciate the characters more if you do so.  Extremely delicious sexual content and hard descriptive violence.
~Happy reading!