Point of View by Virginia Farmer

Point of View by Virginia Farmer

“No, Virginia, POV is not privately owned vehicle. It’s point of view.”

What the heck waspoint of view anyway?

After pouring over books on writing, that question, as well as a few more, was answered.

Point of view is the camera through which your story is viewed. This camera is in the head of your character. It is through that character’s eyes and emotions the story will be told.

What does it do?

It is the vehicle with which to tell the story, it establishes the setting of your book and the characterization of the people in it.

The pitfalls — this POV are that the character can come off as self-centered, (it’s all about them). Also, the view point character can’t describe himself/herself without using the old cliché of mirrors, windows, pools of water or the bottom of shiny pots. Another pitfall — the reader doesn’t know what’s going on with other characters in the book, and readers are nosy people!

Single POV — Third person – subjective. This POV uses only one character and “he/she”— no use of “I” here.

Single POV — Third person – objective. This view point uses only one character and “he/she” as well, but the character is observing the scene, thoughts and feelings are not revealed.

Did I mention Multiple POV? This view point involves the reader in more than one character. This is the most common POV used in the romance genre. It helps to build suspense because the reader is given hints or clues as to what’s going to happen to the main character. It fleshes out the story and adds layers, making it more complex and allows the development of secondary stories. But caution must be used. Don’t overload the story with too many view points. The reader wants to form an emotional bond to the main character, too many shifts of POV weakens that bond.

What about Omniscient POV? I call it, “The see all and know all, Karnack the Amazing.” Written in third person using “he/she,” it doesn’t get into the heads of the characters. It describes the setting or actions of the scene. It’s often used at the beginning of a book. One of the drawbacks of omniscient POV is that it’s difficult to build tension, identify conflict and connect the reader with the characters.

Care must be exercised when using multiple POV. You want the reader to connect with the protagonist. Too many view points will jerk the reader from the scene and weaken the reader’s attachment to the character and even cause her to stop caring about the character—something to be avoided at all costs. Personally, I tend to use four: the hero, heroine, antagonist and a secondary character for back story). From 1 to say 5 are about standard, but in that, there will always be one dominate POV. This character is the book’s protagonist and most of the story will center on his/her tale.

So whose viewpoint should I use? In most fiction, multiple POV is used. So how, as writers do we decide which POV to use in the chapter or scene? Ask yourself these questions:

The Big No-No’s!Don’t change view points within a paragraph. It’s confusing to the reader. And a confused reader will often put the book down. And when in the midst of a scene, use great caution when switching the POV. Make sure the shift moves the scene, and that your transitions smooth and clear. Remember, every change of viewpoint disturbs your reader, so choose them carefully.

When changing POV, your reader will be less disturbed if you make your POV shifts smooth. There are a couple ways to do this.

To prevent headhopping, (my chief complaint), ask yourself:

Can my character see, touch, smell, taste, think, feel or hear whatever I’ve written? If not, revise. Most cases of headhopping can be easily fixed.

There is one other item in POV, typically labeled, Deep POV. Most writers go into deep POV without even thinking about it. Deep POV is when you take the reader into the character’s mind where he/she remembers past experiences, fears and joys. This is where many writers carefully add bits of backstory. It helps to flesh out the character and justify his/her feelings and reactions, conflicts, goals and motivation.

By mastering Point Of View, you’ll write a richer story and your reader will invest in the character and ultimately in your book. And isn’t that what you want to do—connect with your reader, draw them into your story, keep them up till all hours of the night reading your book?

Virginia Farmer, author of three novels and winner of the 1999 Golden Heart, lives in a house she’s trying to drag into the 21st century in Spartanburg, SC. She keeps busy with renovations, writing and keeping up with her husband and two puppies, Gray Sea and Skeeter. You can visit her website at http://www.officialvirginiafarmer.com

We appreciate Virginia’s contribution to the writing tips at Once Upon A Romance. Please, visit her website for more info. Click on the link below.
www.officialvirginiafarmer.com 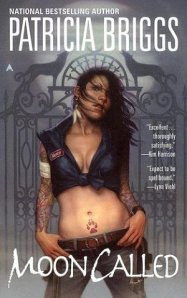 I’m going to ignore what I know about the rest of the books, and write this review based on THIS book.  I’ll do my best.

Although I will write about specific moments in this book, this review contains NO SPOILERS!

The Moon series by Patricia Briggs is really quite amazing.  It is based on a walker named Mercy Thompson.  She’s a neat little mechanic who can shift into a coyote

Her character progression totally rocks! But .. that is for a different book review.  I don’t want to spoil anything!

Raised by a pack of werewolves, Mercy Thompson fell in love with the Alpha’s son, Samuel.   In her teens, she is told that she must leave the pack and seek her other family.  She had a choice.  Run away with Samuel or leave everyone she grew up with.

She chose to leave.. alone.

Adam is a dominant, arrogant and bossy man.  Handsome, sexy and irritating, Mercy finds herself inventing ways to tease and annoy him.  Thank goodness for broken down bugs.  You’ll see.

Since wolves would normally eat coyotes, their relationship is a little funny but intense and frustrating.

Adam Hauptman, who shared my back fence line, was the Alpha of the local werewolf pack.  That there was a werewolf pack in the Tri-Cities was something of an anomaly because packs usually settle in bigger places where they can hide better, or, rarely, in smaller places they can take over.

For the first time since she left the pack she was raised by, she runs into Samuel interesting way.  There is nothing like tucking your tail and sliding under a werewolf’s legs to avoid being eaten to shove you into more common sense than irrational emotion.

Sam’s eyes were deeply set, his nose was too long, his mouth too wide.  His coloring in human form was much less striking than his wolf: light blue-gray eyes and brown hair, streaked just a bit from the sun.

Being both dominant male werewolves, Adam and Samuel with their instincts of defending their territory.  Being stuck in the crossfire, Mercy Thompson stands up for herself and lets both of the men in her life know exactly where they stand.  She was not theirs.  They had no claim to her.  Period.  Funny how things turn out, eh?

Searching for the betrayers that kidnapped Adam and his daughter, Mercy and Samuel must request help from the vampires.  Those sneaky little devils are a pain in the rear to say the least.

Thankfully, Mercy fixes Stephan’s Scooby Doo bus, and his sweet but manipulative vampire self does his best to protect her from those she seeks help from.

This book is somewhat predictable, but that does nothing to ruin its standing.  This series is incredible and a must read.

I wish I could say more, but I’m tongue-tied until the next review o.O

I recommend this book to mature adults.  Although there is no sexual content, the mild violence is inappropriate for younger eyes.  It is extremely important to read this series in order.  I will be reading the rest of the series in the next week, so only read the reviews before starting each book.  Reading all of the reviews before starting the series is a total bummer.

Line of the book

“Dance when the moon sings, and don’t cry about troubles that haven’t yet come.” 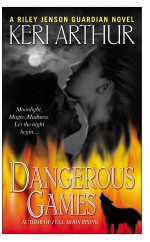 This book bored the everliving shit out of me.  BORED ME!  College classes, midterms, tests, homework … All I wanted was something hot!  Something sizzling .. something that would distract me from the apparently endless number of dense students that attend my college.  But .. no.

When I found this author …this series, I was excited!  I lovelovelove Anita Blake and hot damn this series is similar and just flat-out does it for me.  Unfortunately, every writer has his or her moment and Arthur had hers while writing this book.

Did I mention boring?  Ok, let’s see, shall we?

Plot!  Sexy Riley Jenson, wolf chick who has a thing for Kellen (Alpha werewolf dude) and Quinn (oddly seductive with a side of soul mate vampire).  How can you possible have a paranormal romance series without the inevitable lustful triangle?  To put it simply … You can’t.

Women are being slaughtered, mutilated and raped by some finger devouring demon who somehow manages to brutally kill his victims and dumps their bodies with a shameful yet satisfying smile.

We have the devious and evasive Gautier who … is irritating.  Although there is a tremendous amount of back story for this character, I find him hollow and unworthy of my attentions 🙂

Searching for an archaic dark god who accompanies a three-headed dragon known as death, pain and desperation, Riley finds herself with a sadist (dragon head dude of pain hah) who finds Riley quite appetizing.  *rolls eyes*

There are a few, brief moments of intrigue, but other than that … I suffered my way through this book.

The short conversation below may seem boring, but the progressing relationship between Riley and Sal is hilarious.  Two strong-minded females, one vamp, one werewolf .. It’s downright comical 😉

“For weres, or for vamps who have the hots for their boss?”

“Humans, asshole.  Anything else?”

“Nope.  Such a pleasure talking to you again, Sal.”

This book displeased me until the last 20%.  With that said, I give this author and the Riley Jenson Guardian series a two thumbs up.  I find it fascinating and I sincerely hope that the next book does not leave me wanting.

I recommend this book to mature adults only.  Totally rockin awesome violence and sadomasochistic sexual and violent content.  Read this series sequentially or it will not make a bit of damn sense.