As always, colored text has been taken directly from the book.

Night Embrace is the amazing story of Talon and Sunshine.

Sunshine comes from a carefree and loving family.  Filled with laughter and friendship, Sunshine leads the sweet life of an artist.  Drowning in pink and purple flowers while singing Puff the Magic Dragon, she is everything that will drive Talon up the wall.  Or seduce him with amusement.

“You know, Sunshine, you need to find a man like that to marry.  Someone so well hung that even after three or four kids, he’d still be wall to wall.”

Talon, another Dark-Hunter with a tragic past, protects humans through the centuries of loneliness.  Calm and collected, he has one mission in life.  Protect and survive.   Forcing the emotions and pain of betrayal, he glides along the way through the days, years and centuries without mourning the loss of his wife, his son and his family.

“Never let anyone know you.  Never give them a chance to realize you don’t age.  Move through the darkness ever watchful, ever alert.  We are all that stands between the humans and slavery.  Without us, they all die and their souls are lost forever.  Our responsibilities are great.  Our battles numerous and legendary.  But at the end of the night, you go home alone where no one knows what it is you have done to save the world that fears you.  You can never bask in your glory.  You can never know love or family.  We are Dark-Hunters.  We are forever powerful.  We are forever alone.”

Acheron becomes more engrossed in this book.  Kenyon gives you a few glances into his past that will leave you frustrated with curiosity.  No worries!  His novel will be read before you know it!

Fighting their love for one another, Talon and Sunshine are soul mates.  Reincarnated with Talon’s wife’s soul, they are extremely attracted and are unable to keep their hands to themselves 🙂

This book is far more sexual than Night Pleasures or Fantasy Lover.

Many characters are introduced in this book.  I love most of them and I look forward to rereading their stories!

Vane and Fang, wolves who can take human form, repay a debt to Acheron and form a temporary alliance.  With this, the book unravels many stories to come.  This book is a MUST read if you plan on continuing with the other books in this series.

I recommend this book to mature adults only.  Although this book is filled with paranormal yumminess, I highly advise against allowing a teenager or child to read this series.  People tend to forget that children are indeed children and NOT young adults.  This book is not for innocent eyes.

Line of the book:

“But without pain, you can’t have joy.  It’s the balance that makes us appreciate the extremes.” 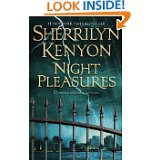 Night Pleasures is the second (Actually, the sequence is interesting but I’m referring to them as I will .. neener) book in the Dark-Hunter paranormal and mythical romance series by Sherrilyn Kenyon.

This story is of Kyrian and Amanda.

When I first read this series, I thought I read the wrong book.  What does this book have to do with Fantasy Lover?  Well, almost nothing IMO.  There are a few tidbits that  flow into each other, but not enough to really tie them together.

Night Pleasures really takes off into a unique world of vampires, daimons, gods and demigods and Dark-Hunters.  It’s all very quite interesting and wholeheartedly intriguing.  Unlike Kenyon’s recent publications, this series is more adult focussed.

Kyrian, a General, a Commander and Julian’s right arm from ancient Greece, is fighting the daimons in effort to protect the little humans.  He’s a lonely, cold and bitter man who refuses to care for another.  Refuses to give any second thought to a woman.  Refuses to find himself betrayed by the woman he loves….Again.

“What are Daimons?” she asked.

“They’re vampires on steroids with a God complex….”

Amanda is an accountant and is just one sister in huge family of weirdos.  Psychics, Mistresses, Prophets and Vampire hunters, Amanda has spent her entire life refusing her powers, pretending as if nothing was wrong with her.  Striving for normality, she forces her other half, the half she has buried so deep that it has fallen asleep, she dates regular men in hopes of a normal life.  Everything her family isn’t.

“I faced down an entire Roman legion with only a sword to protect me.  Now, why would I be afraid of some two-bit, half-god Daimon with an inferiority complex?”

Finding herself handcuffed to Kyrian in an unknown room, she realizes that her captors believe she is her twin sister Tabby, the vampire hunter.  She is anything but submissive or passive which just about drives Kyrian up the wall.

That did it.  She hated alpha men in the worst sort of way.  Those domineering, I’m-the-man-baby-let-me-drive types nauseated her.

“All right, macho babe boy,” she said irritably.  “I’m not some little ditz to bat my eyelashes at the buff stud in black leather.  Don’t try your he-man tactics with me.  I’ll have you know, in my office I’m known as the ball-breaker.”

I recommend this book to mature adults only.  Extremely fun violence and moderate to hello there baby sex content.  I give this book a double thumbs up for its genunity and delicious descriptive intimate moments…even those without any lust.

Now, I’m on to the next book! …Night Embrace .. The story of Talon and Sunshine.

Book of the day .. Fantasy Lover – A Dark-Hunter series novel # 1 by Sherrilyn Kenyon

As most of you know, I love to read.  Shocker, right?  Little sister reads a ton of romance / paranormal stuff.  At first, I put my nose in the air at the very idea of reading a romance novel.

I mean seriously .. Who is pathetic enough to actually read “that shit” ..

Well, that’s me!  I first started with borrowing one book at a time (Frustrating right?) of Christine Feehan’s Dark series.  Well, I did not see my sister everyday (the amount of time it takes me to read a book) so I talked her into 2-3 per visit 🙂

After finishing the Dark series by Feehan in less than a month, I had no idea what to read next!  I was totally hooked on paranormal romance.  Feed me more baby!

So she introduced me to Sherrilyn Kenyon’s Dark-Hunter series.  Now, this first book was just flat-out disappointing.  Perhaps that was then and now this is .. now? heh

I’m going to attempt to reread this series this month.  We shall see how it goes!  It is a fantastic series .. check it out!

Being trapped in a bedroom with a woman is a grand thing. Being trapped in hundreds of bedrooms over two thousand years isn’t. And being cursed into a book as a love-slave for eternity can ruin even a Spartan warrior’s day.

As a love-slave, I know everything about women. How to touch them, how to savor them, and most of all, how to pleasure them. But when I was summoned to fulfill Grace Alexander’s sexual fantasies, I found the first woman in history who saw me as a man with a tormented past. She alone bothered to take me out of the bedroom and into the world. She taught me to love again.

But I wasn’t born to know love. I was cursed to walk eternity alone. As an ancient Greek general, I had long ago accepted my sentence. Yet now I have found Grace– the one thing my wounded heart cannot survive without. Sure, love can heal all wounds, but can it break a two-thousand-year-old curse?

Posted in Book of the day