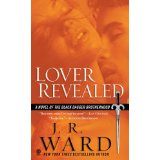 Lover Revealed is the fourth book in the Black Dagger Brotherhood series.

This story is about Butch and Marissa.

Although there is a tremendous amount of character progression in this book, the story behind Butch and Marissa is unremarkable.

John’s character really blossoms in this novel.  He is knee-deep and falling faster onto a self-destructive path.  Mourning the loss of the only parents he ever knew, Torh and Wellsie, he alienates everyone and finds himself angry and confrontational.  One of the many outlets is Lash.  That bastard is just a plain old asshole 🙂

As I said, the relationship part of this story is eh whatever, but Butch’s character progression deepens into something totally rockin’ awesome!  He becomes this .. well shit.  I can’t tell you what happens!  But it, along with the other soap opera worthy moments, makes this book a must read.   I do believe there will be a discussion post for this book.  I have to get it out of my system somehow.

Vishous and Butch’s relationship is very weird.  You’re really not quite sure what is going on, or how their characters “feel” about each other.  Tip toeing over a thin line of “hmm” .. What happens between them is astonishing.  Their two characters become entangled in a prophetic fate that changes everything concerning the Black Dagger Brotherhood.  Everything they know, how they fight, how and who they kill .. everything changes in this book.

This book is a MUST read for anyone reading this series.  As stated, although the relationship aspect of this book is seriously disappointing, everything else is extremely important to the rest of this series.  Many questions are answered.  Many secrets revealed.

I recommend this book to adults only.  Children and immature adults should not be allowed to read this series.  Extremely delicious and severe violence.  Moderate sexual content (Not nearly enough if you ask me~!)
~Happy reading 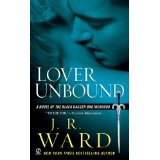 If I remember correctly, I don’t think I cared much for this book.  I guess we’ll see, won’t we?

Posted in Book of the day

The third novel in the Black Dagger Brotherhood is very intense.  Anyone as cold or filled with rage as Zsadist, has an extraordinary story behind him.

As with all Black Dagger Brotherhood novels, this one is filled with lust and love.  Betrayal and violation.  Restraint and fury.

This novel is about Zsadist being consumed by the force of Bella!  It is one of the best books in this series.

The story behind Zsadist is amazing.  I don’t mind writing a few tidbits about him here, as it encompasses the entire novel and is not too bad of a spoiler.

Zsadist was kidnapped, taken from his home and his twin, Phury.  For over a century, he was a blood slave to a narcissistic Mistress.  Unfortunately, the violations did not stop there.  After his transition, he  became her favorite of all her slaves.  Rape and mortification.  The story is pretty damned brutal and a must read.

Behind all of the bitterness, violence and anger, is a man suffering from those traumas.

Bella, a stubborn and high-class woman in their race, was kidnapped in the end of the last book.  Taken from those lesser bastards, she is beaten but never conquered.  Zsadist raged through the nights, never stopping, never accepting her death.  Searching for the lesser that could lead him to her, his brothers become disgusted and worried with the obsession that fills Zsadist.

Fighting to breach the walls that Zsadist has so carefully forged, Bella is fighting a terrible battle of will.  She wants Zsadist like none other, and the effort she makes to understand him, and to have him open up enough to give her love a chance, is tremendous.

This soap opera series is incredible.  The character progression that takes place around and during Bella and Zsadist’s story is what truly makes this series unique and heart wrenching.

I recommend this book to adults only.  Do not allow children to read this book.  Moderate to extreme violence.  Severe and disturbing sexual content.  Rape.  Abuse.  For anyone reading this series, this book is a MUST READ.  As always, all of the books in this series must be read in order.